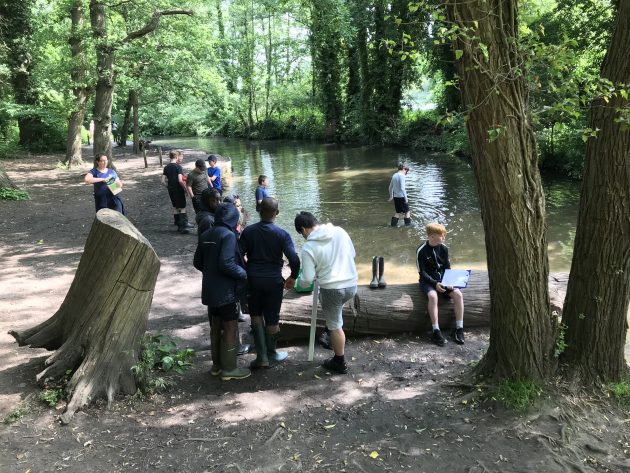 Year 8 visited the River Darent at Lullingstone Country Park to carry out fieldwork on the river. Students collected data on a meander and straight section of the river to enable them to compare the two. Width, depth and velocity readings were gathered using a range of fieldwork equipment. The students enjoyed the experience of actively carrying out fieldwork and the river was a perfect place to be during the three incredibly hot days.

Praise from the park!

On behalf of the staff here at Lullingstone I wanted to say what a pleasure it was having your boys on site these last 3 days.  Considering school trips have not been the norm for some time, the boys were very well behaved and well mannered.  The site was very busy with other park users during your visit and the boys were considerate of this.  We even had some members of the public come forward to comment how well behaved the boys were and how lovely it was to see young people enjoying and learning about the park. 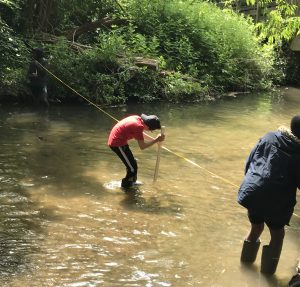 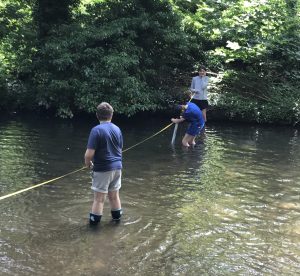 On Tuesday 17th of June we went on a school trip to Lullingstone country park to record some data from the river Darent, a relatively local river that starts at Westerham and flows for 25 miles where it meets its end and joins the river Thames at Dartford.

It was a prompt start as we registered in the playground and were assigned our group leaders, we arrived at lulling stone at a few minutes past 9. The groups split and we were briefed about what data we needed to collect and how to do it safely and efficiently. For my group (group 1) our first task was taking various measurements from a meander (bend) the river, such as the width and average depth which involved wading through the river and sacrificing a dry pair of socks. We also measured the average float velocity at different points in the channel.

Our third and final task was a long walk around the surrounding parkland to look at how the surrounding landscapes can affect the river. luling stone is also a place that is steeped in history. We visited the lulling stone castle and learned some interesting facts. Did you know that the castle has been lived in by the same family since it was built in the late fourteen-hundreds?

The estate had a silk farm that produced the silk for Queen Elizabeth’s wedding dress.